In the Bible, Lot's wife is a figure first mentioned in Genesis 19. The Book of Genesis describes how she became a pillar of salt after she looked back at Sodom and Gomorrah. She is not named in the Bible but is called "Ado" or "Edith" in some Jewish traditions. She is also referred to in the deuterocanonical books at the Book of Wisdom (Template:Bibleref2) and the New Testament at Luke 17:32. Islamic accounts also talk about the wife of Prophet Lut (Lot) when mentioning 'People of Lut'.

The story of Lot's wife begins in Genesis 19 after two angels arrived in Sodom at eventide and were invited to spend the night at Lot's home. The men of Sodom were exceedingly wicked and prompted Lot to offer up these men/angels; instead, Lot offered up his two daughters but they were refused. As dawn was breaking, Lot's visiting angels urged him to get his family and flee, so as to avoid being caught in the impending disaster for the iniquity of the city. The command was given, "Flee for your life! Do not look behind you, nor stop anywhere in the Plain; flee to the hills, lest you be swept away."[1]Template:Rp While fleeing, Lot's wife turned to look back, and was turned into a pillar of salt.[1]Template:Rp 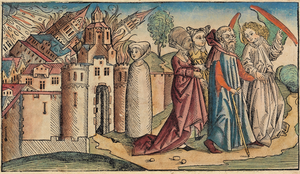 The story appears to be based in part on a folk legend explaining a geographic feature.[3]

A pillar of salt named "Lot's wife" is located near the Dead Sea at Mount Sodom in Israel.[4] The Mishnah states that a blessing should be said at the place where the pillar of salt is.[1]Template:Rp[5] The term "Lot's wife" for such geographical features subsequently entered common parlance, as one of the outcrops comprising Long Ya Men was also nicknamed thus.[6]

The Jewish historian Josephus claimed to have seen the pillar of salt which was Lot's wife.[7] Its existence is also attested to by the early church fathers Clement of Rome and Irenaeus.[8]

In Judaism, one common view of Lot's wife turning to salt was as punishment for disobeying the angels' warning. By looking back at the "evil cities," she betrayed her secret longing for that way of life. She was deemed unworthy to be saved and thus was turned to a pillar of salt.[9]

Another view in the Jewish exegesis of Genesis 19:26, is that when Lot's wife looked back, she turned to a pillar of salt upon the "sight of God," who was descending down to rain destruction upon Sodom and Gomorrah.[1]Template:Rp One reason that is given in the tradition is that she turned back to look in order to see if her daughters, who were married to men of Sodom, were coming or not.[1]Template:Rp

Another Jewish legend says that because Lot's wife sinned with salt, she was punished with salt. On the night the two angels visited Lot, he requested that his wife prepare a feast for them. Not having any salt, Lot's wife asked her neighbors for salt, which alerted them to the presence of their guests, resulting in the mob action that endangered Lot's family.[1]Template:Rp

In the Midrash, Lot's wife's name is given as Edith.[1]Template:Rp

Lut fleeing the city with his daughters; his wife is killed by a rock.

In the Quranic telling, Lut warned his people of their imminent destruction lest they change their wicked ways, but they refused to listen to him. Lut was ordered by Allah to leave the city with his followers at night, but to leave his wife. As soon as he left, Allah brought down upon them a shower of stones of clay.[11]

The difference between this telling and the Judeo-Christian telling from the Book of Genesis is that Lut's wife was destroyed alongside the wicked; in other words, she did not flee with Lut. This is because Lut's wife was as guilty as those who were punished. So much so, that she is mentioned in the Quran alongside Nuh's wife as two impious and disbelieving women who were punished for their wickedness, irrespective of their being related to prophets.[12]

Lot's wife is the subject of the poem "Lot's Wife" by Anna Akhmatova, which offers a more sympathetic view of Lot's wife's choice to look back. Scott Cairns' poem "The Turning of Lot's Wife" also reimagines the story from a feminist perspective. Lot's wife is mentioned in the opening chapter of Slaughter House Five by Kurt Vonnegut. Vonnegut also offers a sympathetic view and compares her looking back at Sodom to his recalling the fire bombing of Dresden.[15] Monash University's student newspaper, published by the Monash Student Association since 1964, is entitled Lot's Wife. The reasoning given for this by the newspaper's editors (who changed its name from Chaos) was that while a "university newspaper is one of the pillars of campus society" ideally a paper adds "a distinctive savor to an ever changing menu of intellectual aliment".[16] She is also mentioned during the off Broadway musical Hedwig and the Angry Inch in the lyrics of the song "Wicked Little Town". Lot’s wife is paralleled in Shirley Jackson’s short story “Pillar of Salt”, in which a woman visiting New York with her husband becomes obsessed with the crumbling of the city.